Is There a Link Between Marijuana Use and Kidney Disease? The Answer Will Shock You

What’s the connection between marijuana and kidney disease? This is a question I get a lot, especially in today’s world where marijuana is becoming much more widely used for both medical and recreational purposes. Can kidney disease be worsened by consuming too much marijuana? The short answer is, no. But the long-term effects of heavier usage aren’t so conclusive.

What used to be unheard of in the industry is not anymore. Before our very eyes, the marijuana industry is budding and its growth is looking like something that will be unstoppable. A report by the cannabis research firm, ArcView, in conjunction with BDS Analytics projects that from now through 2021, the legal weed sales in North America will rise by 28% every year. If this report is anything to go by, it means this industry could be making as much as $25 billion on a yearly basis till that period and this is the type of investment that investors love.

There has also been a dramatic turn in the perception of this substance. A remarkable increase has been witnessed in the number of both people who use it and those who favor its legalization for adult consumption. About 29 states in the US have legalized pot while 9 have permitted the use of recreational cannabis.

Is there a link between marijuana use and kidney disease? Some interesting facts have been confirmed

There is still some level of uncertainty about the effect of cannabis on the long-term health of users. It’s no longer news that tobacco has been linked to increased risk of cancer, heart disease and a host of other health complications; some researchers and opponents claim that similar risks may be associated with cannabis.

For reference sake, kidney disease is the ninth leading cause of death in the United States and a research study, aimed at ascertaining the link between cannabis and kidney disease sought to determine a connection, if any.

For this study, 13,995 adults between ages 18 and 59 were examined between 2007 and 2014. The result from this study showed that moderate to frequent users of cannabis who are under 60 years of age and were otherwise healthy have no worry concerning their kidney health.

That said, the research didn’t address the link between cannabis use and kidney diseases in heavy users, elderly and pre existing kidney disease sufferers. It is true that more extensive studies need to be carried out to cover different variables but from the study results we have now, users of cannabis under the age of 60 years have nothing to worry about.

If cannabis use and its effect on the kidneys are important to you, be sure to check out another of our articles on the subject. For those of you looking to know the in’s and out’s of kidney disease, along with which foods are best to keep your kidneys in the best possible shape for as long as possible, please be sure to check out our All-Natural Kidney Health & Kidney Function Restoration Program. 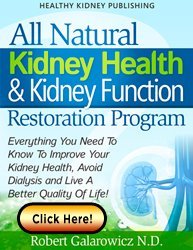