Kidney cancer is cancer which effects the kidneys. If it starts outside the kidneys and metastasizes to the kidneys, it is not called kidney cancer. The human kidneys are made up of about a million filtering units called nephrons. Basically, kidneys filter waste and extra, unwanted fluid from the bloodstream. Each nephron includes a filter, called the glomerulus and a tube.

The nephrons work through a two-step process: the glomerulus filters your blood under pressure and the tube gives your body the needed nutrients while getting rid of the waste.

Risk factors for kidney cancer include age, obesity, smoking and high blood pressure. It usually originates in one of two parts of the kidney; the renal tubule and/or renal pelvis. 63,990 cases are diagnosed with over 14,000 people killed every year. This cancer is the tenth most common cancer and occurs usually between the ages of 50-80. North America has the highest rate of kidney cancer, though it is beginning to grow in the developing world. This may be due to the growing obesity rate or because of improved detection methods.

There are a variety of causes of kidney cancer, Generally, cancer is the result of changes in DNA. These genetic mutations cause the growth of tumors which can spread throughout the body. In the case of kidney cancer, these mutations begin in the tiny cells which line the tubes of the nephron or in the tubes which connect the kidney to the bladder.

In the case of a childhood kidney cancer like Wilms’ Tumor, it is because of the loss of a tumor suppressor gene called QT1 on chromosome 11. A new study led by researchers at Roswell Park Cancer Institute establishes a connection between a sedentary lifestyle and risk of developing kidney or bladder cancer. The findings extend a line of inquiry that has already revealed a connection between chronic inactivity and heightened risk for both ovarian and cervical cancer, and also highlight the possibility of reducing risk for some cancers by increasing physical activity.

Inactivity is another cause, statistics showing a 77% increased risk of developing renal cancer. There is a similar risk people both obese and not obese suggesting that inactivity and these cancers is not caused by a person being overweight. Experts recommend 150 minutes each week of moderate physical activity or 75 minutes each week of more aggressive physical activity in order to benefit.

Arsenic in drinking water is another risk, as it may have the ability to remain dormant in a person for years. In many countries, inorganic arsenic already exists at very high levels in ground water. It can cause kidney cancer, skin cancer, lung cancer and bladder cancer, as well as cardiovascular disease and other diseases.

One of the scariest prospects of this kind of cancer is the lack of warning in the early stage. In later stages, patients will begin to see blood in their urine and maybe a lump or mass near or on their
kidneys. Less often, a patient may experience constant pain on their sides, abdominal lump, a constant fever, night sweats, tiredness or fatigue, weight or appetite loss and even anemia.

Treatment options can vary depending on the patient and their health and age. The most common option is to remove the affected kidney. Losing a kidney to surgery is not serious as a person can live a normal life with one kidney. In some cases doctors only remove part of the affected kidney.

When a whole kidney is removed doctors will also remove the nearby adrenal glands, a border of healthy tissue and the adjacent lymph nodes. Even if the cancer has spread, the kidneys may be removed just to ease the pain.

There is also a growing body of research which recommends doctors and patients not rush immediately to therapy. When kidney cancer and other cancers have spread, it is the goal of physicians to slow the cancer down with antiangiogenic drugs like sunitinib and sorafenib. These chemicals are designed to prevent the formation of new blood vessels which feed the tumor and allow it to spread.

These treatments are expensive, do not cure the disease, and come with risks including an increased risk of stroke and heart attack. Some patients can actually live for months and even years without the disease getting worse if they have a slow growing tumor. This wait and see approach, monitored by a physician has showed to be most successful in adults with limited cases of metastatic cancers and other illnesses such as anemia, thrombocytosis and greater disabilities.

In one study, 29 patients who had two or less organs affected and one or no risk factors survived three times longer simply being observed than the others.

As mentioned early, though, age is a big factor in the effectiveness of treatment. Patients who have kidney tumors who are over the age of 75 do not live significantly longer. This is because these patients usually have other medical issues and complications.

Other methods of treatment include nephron sparing surgery, where the tumor is removed from the kidney and the kidney is left inside. This is recommended for patients who are over the age of 75. In cases where the whole kidney was removed, after approximately four years, 28 percent of patients died.

In 29 percent of these cases it was due to heart disease while the spread of cancer only contributed to 4 percent. In addition, it has been found in patients who had the whole kidney removed had
accelerated failure and damage to their remaining kidney.

An example of cryoablation, which freezes tumors in order to destroy them.

Researchers are beginning to discover other options in nature which can help them when kidney cancer begins to resist. Researchers are studying fatty acids commonly found in fish and fish oil supplements which may be able to help patients fight this illness. Called docosahexaenoic acid (DHA), they may reduce the cancer’s invasiveness, growth, and blood vessel growth. But, they would have to be combined with the anti-cancer therapy known as regorafenib.

Regorafenib specifically attacks tyrosine kinases, enzymes which trigger other proteins. Kidney cancer can mutate and adapt to treatments, but this fish oil might be able to counter that mutation. Research is still being done but initial findings seem promising with the most recent studies discovering that fish oil supplementation, in conjunction with conventional treatment using regorafenib, was able to reduce tumor weight and growth.

Prevention Is Key For Kidney Cancer

The natural antioxidant lycopene, found in foods like tomatoes, watermelon and papaya, may lower the risk of of kidney cancer in post-menopausal women. In women, it is the eight most common type of cancer and usually is diagnosed in later stages. Lycopene and other micronutrients possessing antioxidant properties, including lutein and vitamins C and E provide 39 percent lower risk of kidney cancer. In cases of hypertension in women, it is a low salt diet is recommended as a way of preventing kidney cancer. 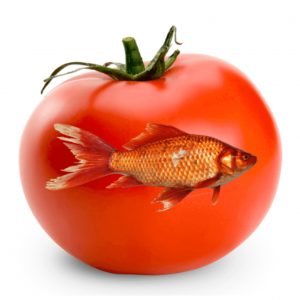 Exposure to sunlight has been talked about as a risk for other cancers like skin cancer. But, in the case of men employed in outdoors work have a reduced risk of kidney cancer compared with men who were less likely to be exposed to sunlight at work. No similar association has yet to be found in women.

This may be due to differences in hormones or because men tend to go shirtless while women tend to use sunscreen.

Researchers say vitamin D may also help prevent cancer. Vitamin D, once metabolized is busiest in the kidneys. Because of the increase in kidney cancer and the increase of Vitamin D deficiency, scientists are trying to find out if the two are related in some way.

Living with kidney cancer can be very complex and tough on a patient. The psychological side effects are numerous, aside from the above mentioned. Patients in other studies have reported guilt from
being a seemingly negative effect on those around them because of their illness. There is a constant swing of emotions from acceptance, depression and anger.

Anxiety is another unseen agony and the fear of what the future may hold. Many patients go into a kind-of mourning period over their past selves’ period as this requires massive lifestyle changes and the loss of capabilities and freedoms patients once had.

They also report feeling anger and resentment toward healthier people as they believe those people can never truly understand the patient’s personal agony.

Experts on chronic illness in general report when a patient is diagnosed with such a disease it is normal for a patient to experience turbulent emotions. Distress is a common one and can be made worse if the person has a history of depression in their life or are going through stressful times as is. They also say the above mentioned grief and shame is very normal too.

2. Antioxidant micronutrients and the risk of renal cell carcinoma in the Women’s Health Initiative cohort. https://onlinelibrary.wiley.com/doi/full/10.1002/cncr.29091